We’re Right Here is a campaign led by community leaders calling for a Community Power Act. People’s Health Trust is one of several national organisations supporting the campaign and backing the calls for communities to be given more power to create change.

The We’re Right Here campaign is led by seven community leaders from across England who are calling for a Community Power Act. This legislation would shift the balance of power from central government to local people. Over 100 more community leaders are pushing this call for greater power in their own communities across England by holding events and engaging local people.

We’re Right Here are calling for a Community Power Act, a major piece of legislation which would fundamentally change where power lies in this country.

These neighbourhood-level arrangements would bring local people, community organisations and local authorities together to share power and make decisions.

This independent office would be charged with ensuring action is taken across government to uphold the new community rights, enable the formation of Community Covenants everywhere, and generally unlock community power.

About the Community Power Act

The Community Power Act is the missing piece of the devolution puzzle – it will build a clear and trusted track along which power can be devolved from Whitehall to regions, local areas and all the way to the neighbourhood level.

There is already a large and growing movement of people around the country taking action in their communities. This Act would remove some of the institutional and legal barriers in their way. And by changing the basic assumption about where power lies, it would also help inspire others to take action so that ultimately every neighbourhood in the country is supported to take control of its future.

A Community Power Act does not ‘create’ community power on its own. That comes from the awesome potential residing in communities everywhere. But this Act is needed to unlock that potential. We’re Right Here looks forward to working with government, parliamentarians, local authorities, civil society organisations and local communities everywhere to make it happen.

Neelam Heera is the Founder of Cysters, a community organisation in Birmingham and a community leader for We're Right Here. 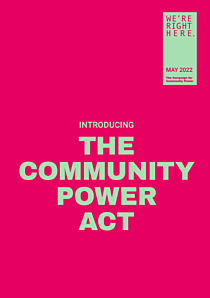