Annual Review 2021: A decade of funding

2021 marks a decade since People’s Health Trust started funding community groups in the most disadvantaged neighbourhoods across Great Britain. During these ten years over £121 million has been raised, over 3,200 projects have been reached and over 600,000 people have been supported.

Our Annual Review showcases some of these amazing organisations that have continued to deliver vital projects tackling social and economic inequalities as well as delivering emergency aid and supporting communities through the Covid-19 pandemic.

"Although it’s easy to see what still needs to change, it’s also important to reflect on the fact that things have progressed. Across the last decade, through the more than 3,200 projects supported across England, Scotland and Wales, we have shone a light on the inequalities in health which blight ordinary lives – something which certainly was not talked about widely a decade ago.

"Over £121m of funding has supported organisations to address the local systemic causes of poor health and early death, including poor housing, low paid jobs and poor income, lack of affordable food, extractive local economies and lack of green spaces to name but a few.

"We have focused heavily on supporting all funded groups to build social connections, partly to combat the isolation epidemic, but also because it is only through people uniting that we see them being able to use their voices and change the systems around them. This review highlights that our independent evaluation clearly demonstrates that people feel more connected, more able to contribute to their neighbourhoods and have higher wellbeing than people in similarly disadvantaged neighbourhoods.” 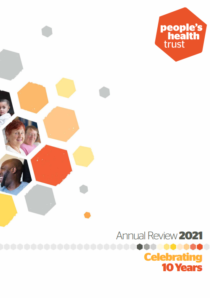 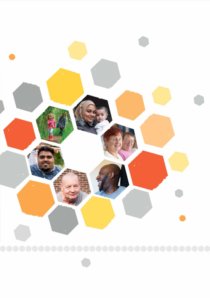 Download a plain text version of the Annual Review.

The pandemic has also challenged all of us and has had a widespread impact on mental and physical health. Nowhere has this been shown more clearly than in the communities that face insecure and low income, poor housing and poor-quality environments. But we have also seen how strong community bonds, social connections and neighbourhood trust have helped people, sometimes through the worst times of their lives, when their worlds have turned upside down.

For a printed copy of our annual accounts, please email us.