Residents in Gateshead volunteered to lead a Local Conversation and deliver on local priorities including a community space so that people can build relationships, offer peer support and extend networks within the community.

This Local Conversation is supported by community organisation Edberts House. A Steering Group of local residents from across the community lead on delivering priorities.

The Local Conversation in the Old Fold and Nest Estates is a long-term programme of change led by local residents who want to tackle health inequalities and improve their area.

Creation of Pattinson House community centre to serve and bring the local community together.

Anti-social behaviour cases reduced to just one since Pattinson House reopened to the public in April 2021 (they had risen during lockdown).

Gateshead has some of the highest levels of disadvantage in England and faces issues such as people feeling isolated and apart from their community. Community organisation Edberts House partnered with People’s Health Trust to support a Local Conversation in the Old Fold and Nest estates in 2015.

The Local Conversation has taken on a number of priorities and invested in a community hub early on. One of the biggest things to come out of the first resident engagement process was a need for a community space so that local people could build relationships, offer peer support and extend networks within the community.

Since then, the Steering Group has secured a building and a disused kebab shop next door to create a permanent community hub. The community hub was redesigned by local people, and refurbished, incorporating a community kitchen, serving hot food to the local community.

Residents have formed strong partnerships with local institutions such as the council’s Neighbourhood Management Team and local politicians. They have provided vital research on delivering public health policy in a community setting and gained support for their project proposals.

Due to the local infrastructure and support they have secured, the Local Conversation was also strongly positioned to respond to community need during the Covid-19 pandemic. One of their priorities during this time was delivering local food parcels and working with schools to ensure children facing food poverty were supported.

Residents feel empowered because it’s their proposal, they have put it together and they have control of it and how the money is spent - it hasn’t come from above. They are making changes in their neighbourhood that they think are important. As a result, there is a responsibility on us as a community to encourage people to make the use of the resources. 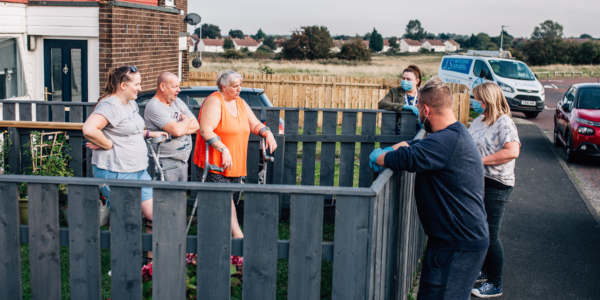 Related to this project

Local people themselves are the force behind each project. Meet some of the people who are out funded partners.

Information sources on how to plan and sustain your community project, whether or not you are funded by us.

We work with 360Giving to make data about our grant-making or projects we fund freely accessible.

A space for our funded partners to connect with us and share challenges, opportunities, and new ideas.