“We want to make our community a better place to be, but we also want to create a group where people feel comfortable to come, particularly for those who might not otherwise come.”

What has the project achieved?

The project responded to the specific challenges of its island location. It found ways to support people living in remote areas, and supported the local community and the local economy by raising the profile of local business or services.

The project brought people from different backgrounds together in a tolerant, inclusive environment, giving them a space for dialogue with those they otherwise would not have met.

The group activities provided opportunities to meet new people and develop social connections. Friendships that initially developed at the meetup later extended outside of the group, making people feel more connected within their local neighbourhood.

One participant attended with her mother, who has dementia. The friendships she made at the project helped develop her support networks in her role as a full-time carer. She felt that other people in the group were understanding of her mother's condition. The group sessions provided social interaction and stimulus for her mother. and gave her a break from her own caring role.

Over time, these improved social links led to other positive outcomes including increased confidence and team working skills.

“People have given talks, for example, on how they see the world... and shared very different views...the nice thing is you don’t feel excluded from that. Anybody is listened to. If they want to talk about something, they can.”

A key strength of the Café Chat project was its integration with relevant local services such as the mental health forum on Skye. The project chose locally based delivery partners to provide activities such as crafts or yoga, often getting recommendations from participants who had attended their classes before.

The project leads also made links with related local organisations, for example encouraging referrals to the group from health services. This kind of integration is particularly important in a small, isolated local economy.

“We are getting invited to their [NHS] meetings now, which we wouldn’t have a year ago. So we can voice to those sorts of things because we hear what the experiences are, that people tell us about, and then we can feed that back to relevant groups and the NHS. We can be their advocate and representative.”

The supportive nature of the group meant that participants felt valued and were encouraged to contribute more to the project. There were usually at least two volunteer participants present at every activity, with some participants taking on extra responsibilities or getting involved in decision-making.

“I thought ‘Oh no, I should have kept my mouth shut’, but in fact it was appreciated. Then later, I was ﻿asked on to the steering group.”

Lessons for other projects

The project was funded with money raised from Health Lottery Scotland, as part of People’s Health Trust’s Active Communities programme.

The project was evaluated by Ecorys as part of the independent evaluation of the 2018–2019 Active Communities programme. The evaluation drew on interviews with project leads, volunteers and the participants across two visits in spring and summer 2019. 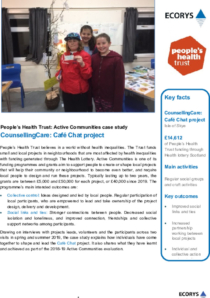