Wider adoption of the real Living Wage could provide an economic boost to UK cities worth over £1.1billion, according to new research by The Smith Institute.

The report found that if just a quarter of those on low incomes saw their pay raised to the real Living Wage, in ten of the UK’s major city regions, a subsequent increase in wages, productivity and spending could deliver a £1.1billion economic boost to major UK cities.

The research shows that a pay rise to the real Living Wage for just a quarter of those paid below it, and living within the UK’s ten major city regions, would mean an average annual pay rise of over £1,700 for half a million people. The report also finds that through an increase in worker productivity and consumer spending, an increase in Living Wage jobs could boost local economies by millions.

The Treasury would benefit from £350million in increased tax receipts and benefit savings.

If half of this £350million boost to the Treasury was returned by central government to city regions, the local economic benefit – a Local Living Wage Dividend - could increase to £1.1billion, when taking into account wider economic benefits such as increased local spending by low paid workers and government driving further economic activity.

The report highlights the role that leading local public and private sector employers such as universities, hospitals, football clubs and city airports can play in providing leadership on the Living Wage. It calls on metro mayors and local authorities to work with these key ‘anchor institutions’ to drive Living Wage take up in their towns, cities and regions, and to integrate the Living Wage into their economic development strategies.

We know work is a social determinant of health, and that good and well-paid work is a precursor to improved health, which is why we are passionate about supporting the real Living Wage.The findings highlight a pathway to improve health inequalities at a local level by ensuring employees are paid a decent wage. We hope the report encourages metro mayors and local authorities to work with anchor local organisations to drive Living Wage uptake at a local level. 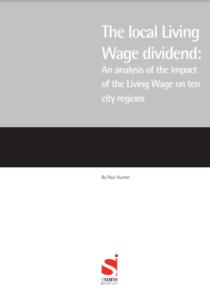