One in three renters live with damp and poor repair, according to ACORN. Such conditions can have a negative effect on health and wellbeing, often leading to people feeling powerless and isolated. Costs, agency fees and eviction fears can also prevent people from speaking out.

The Ethical Lettings Campaign, run by ACORN, was a project funded by People’s Health Trust, based in Easton, a neighbourhood in Bristol with a high proportion of private housing tenants.

ACORN members on a demonstration march

Initially, members campaigned to implement the Ethical Lettings Charter, a code of conduct to raise rental standards. Members helped design activities and led on different aspects of the campaigns such as outreach activities, research and communications.

Within the first six weeks of the campaign, three letting agents and six landlords, who deal with over 500 local private tenants, had signed up. Soon after, it was incorporated into housing policies for Bristol City Council and various other local authorities.

The project’s scope broadened as members gained more knowledge, skills and confidence. This encouraged them to run a number of other successful campaigns to make rental housing more affordable, increase voter registration, and promote a ban on unfair agent fees. These achievements significantly improved living conditions for local tenants.

Project members formed support networks and meaningful friendships within their volunteer teams and also with members of the wider community through the activities. For example, the group held advice sessions and networking events, encouraging local renters and homeowners to come together, bridging divisions and misunderstandings.

Local resident, Jane, discovered the project when one of the organisers knocked on her door to explain that they were looking to mobilise local support and skills to tackle common problems with private landlords.

Jane said: “I was one of the people that set up the first ever public meeting, asking the community what they would like us to work on and it was noted that housing was affecting people in this community".

Jane developed skills and confidence through the project, and by working with and training others, members are empowered to use their collective control to lead and influence local decision-making.

She explained: “We have skills sharing with other members - part of the ethos of ACORN is to build leadership and sharing our skills and experience with each other. So for example, I learnt how to plan a direct action, and have taught other people how to do it. Now there are a whole raft of people in people in ACORN that can plan an action. So we are building leadership and power.”

By developing structures and support to ensure the project is member-led, ACORN members have become more active in other cities and developed a national voice. The ‘Big Housing Conversations’ programme, a community forum facilitated by ACORN and Bristol City Council, was also set up to improve the dialogue between local authorities and tenants.

This case study was carried out by Ecorys UK, who are conducting an independent evaluation of People's Health Trust's Active Communities programme. This case study formed part of the first year of the evaluation process. 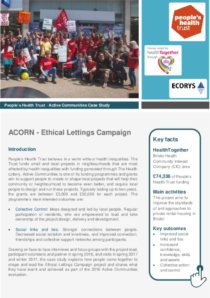